Share to FacebookShare to TwitterShare to Google+Share to LinkedInShare to PinterestShare to EmailPrint this page
CHCA Presents... Disney's Beauty and the Beast
Mar 9 2021

Broadway's modern classic, Disney's Beauty and the Beast, is an international sensation that played a remarkable 13-year run on Broadway and has been produced in 37 countries worldwide. Based on the Academy Award-winning animated feature, the stage version includes all of the wonderful songs written by Alan Menken and the late Howard Ashman, along with new songs by Mr. Menken and Tim Rice. This "tale as old as time" is family theatre at its best.

Senior Eva Milligan, with her beautiful voice and kind spirit, starred as Belle. She led the show through the story with grace and beauty. Junior Matthew Rebhun took on the role of the Beast/Prince Adam. With his mature vocal talent, he brought the Beast from frightening to vulnerable, particularly in his solo “If I Can’t Love Her.” Commanding the stage as Gaston was talented senior Justin Vest, with whom the audience delighted in disliking! Accompanying him was his pal LeFou (hilariously portrayed by junior Colin Swayze) and the Silly Girls (juniors Sophie Rempe and Elle Ziegenfuss, and senior Kate Shields) who brought the audience to laughter with their fawning and crying over Gaston.

No enchanted castle is complete without its favorite characters! As the flirtatious Babette, junior Grace Goodwin charmed the audience and Lumiere, charmingly played by the ever-talented senior Jireh Burton. Junior Jackson Rebhun did a fantastic job providing many laughs as the pompous Cogsworth, junior Caroline Huang was adorable and lovable as Chip, and senior Mackenzie Carnes’ beautiful operatic vocal talent was brought to life as Madame de la Grande Bouche (wardrobe). Junior Bella Randle gave a spectacular performance as Mrs. Potts, particularly shining with the title song, “Beauty and the Beast”.

Not only did the cast wonderfully bring this classic tale to life, but thanks to many parent and student volunteers behind the scenes and the Student Production Team, the set, costumes, and special effects were breathtaking. This was especially apparent in the show’s longest song, “Be Our Guest,” with enchanted objects dancing and singing, including a beautiful chandelier flying high above them (remarkably played by junior Claire Mitchell). It was easy to be swept up in the story with moments such as seeing Belle in her classic yellow dress for the first time, the all-out battle in the castle between humans and objects, and of course, the amazing transformations of prince to beast and beast to prince.

Traditionally, CHCA musicals are accompanied by live music from the student orchestra pit, but given pandemic challenges, CHCA’s incredibly talented orchestra had to remain flexible.

“The Musical Pit Orchestra was faced with a significant challenge this year - how do we keep the longstanding tradition of our orchestra performing the Broadway score, collaborating, and supporting the cast?  With COVID regulations prohibiting our use of the orchestra pit, we decided to record the soundtrack. This was an unknown and daunting task for the students and faculty. However, they were determined to continue their musical contribution. They took on something never done before at CHCA and had to finalize the recording early enough so that the cast could rehearse with it during tech week.

The orchestra students did an outstanding job. Recording is an exciting, yet sometimes sterile environment. You try to be as free and musical as possible, however, in the back of your mind you know the tape is rolling. You must suppress the “don’t mess up” mentality and be expressive. It is a challenging and wonderful experience. We are very proud of our student’s dedication, flexibility, and outstanding music in “Beauty and the Beast”. Bravo tutti!” – Dr. Dan Grantham

It truly took a village to pull off a remarkable production during a pandemic. CHCA Fine Arts Director Mona Summers shared, “Beauty and the Beast was outstanding this past weekend on so many levels, and it was due to our exceptional community of students, directors, and volunteers.” She continued, “Led by our team of extraordinary directors and creative team lead, we were blessed by outstanding performances by our cast, phenomenal work by our student production team, a truly professional sounding orchestra, and amazing parent volunteers. I am so in awe of our theatre community and dedicated Fine Arts staff who support them.”

Director Susan Jung shared these thoughts in the playbill:

“The villagers sing about Belle: “very different from the rest of us – she’s nothing like the rest of us…” Haven’t we looked down on someone for not fitting the mold of our expectations? The mob coming after the Beast sings “we don’t like what we don’t understand, in fact it scares us…” Does that ring true in our county right now?

But then there are lyrics like: “Barely even friends, then somebody bends, unexpectedly” and “Bittersweet and strange, finding you can change, learning you were wrong.” Yes, it’s the famous title song and yes, it’s a sweet moment in a cute show, but…I think these lyrics are in line with the very heart of God. Philippians 2:3 says “Do nothing out of selfish ambition or vain conceit. Rather, in humility value others above yourselves.” Isn’t that what is actually happening in this show?

We have dealt with a lot in the last year and my prayer would be that our community works toward unity, that ours are the hearts that bend unexpectedly, that we would love those different from ourselves, and that we allow God’s love to change us and those we love in return. So that when people ask, “who could ever learn to love a person like that,” ours would be the names on their lips.”

Performing as One
Instrumental & Vocal Music 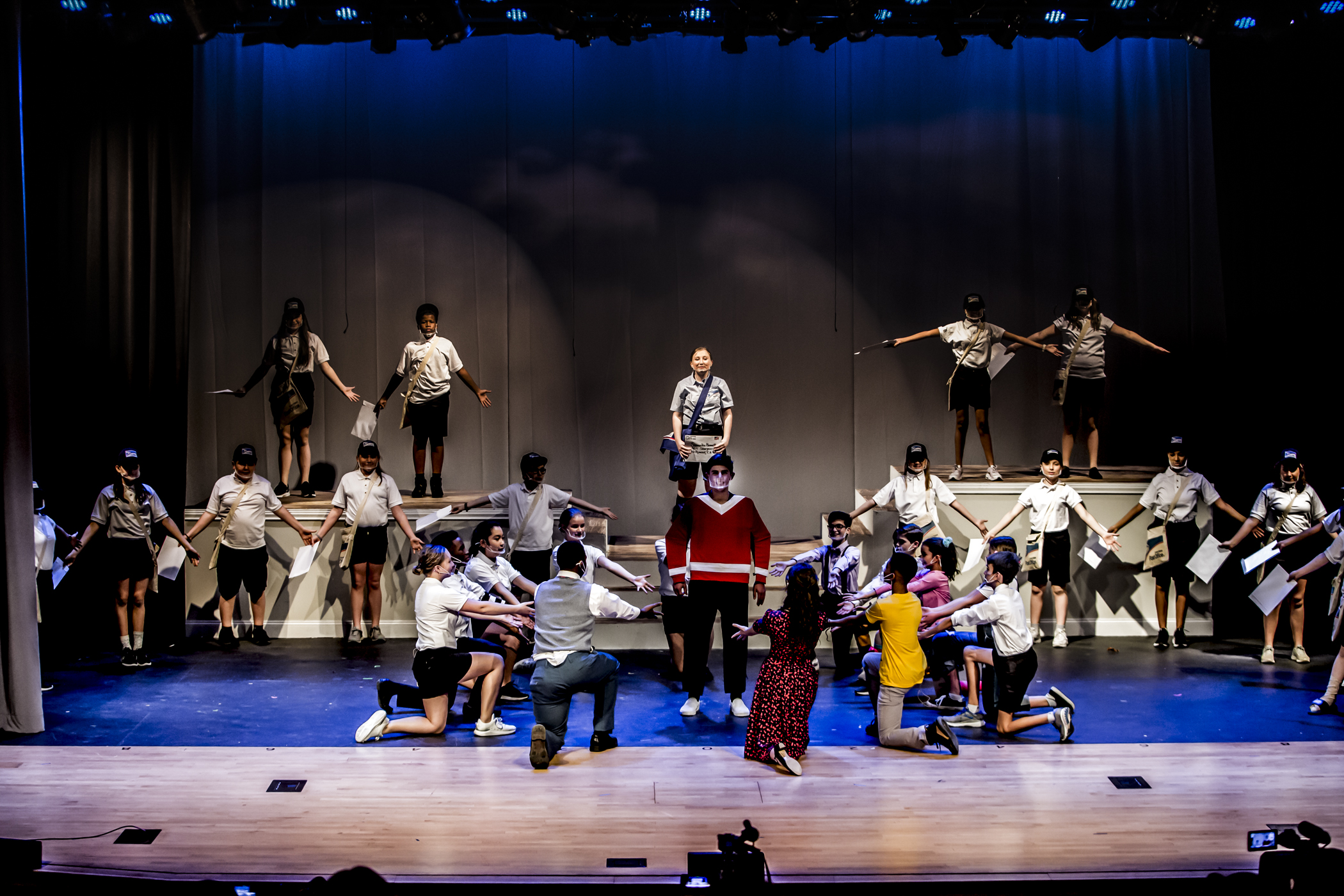