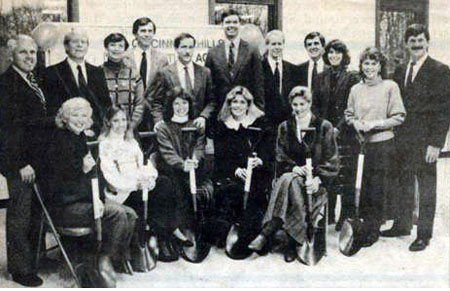 October 1987: A small group of families meet in a northeast Cincinnati home to dream, discuss and pray about the possibility of starting a school. Two criteria are foremost in their minds: that this school be a Christ-centered extension of their homes and that the curriculum offered be such that students would have the training necessary to enter the country’s finest institutions of higher education

This school would be a place where students would be encouraged, through a growing faith and knowledge, to learn and serve.

1988: A 25-acre parcel of former farmland in northeast suburban Cincinnati is identified as a campus for the new school. Today this land, which was home to grades PK to 7 under one roof, is now the Founders' campus (grades 4-8).

September 1989: Under the leadership of Richard Johnson, our first head of school, Cincinnati Hills Christian Academy (CHCA) opens its doors to 165 students, preschool through grade 7.

For audio, hover over/tap the video above,
and click unmute ( 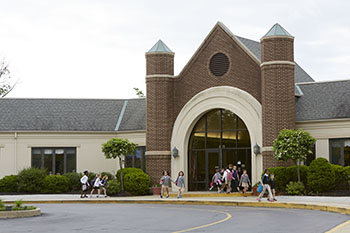 1992: The Edyth B. Lindner Elementary School is built just down the hill from the main campus to house pre-kindergarten through grade four.

1994: The first ever Celebration dinner and auction is held at CHCA’s middle school, entertaining 430 guests and raising $185,821. Celebration will go on to become an annual tradition, raising nearly $2 million for CHCA since its inception. 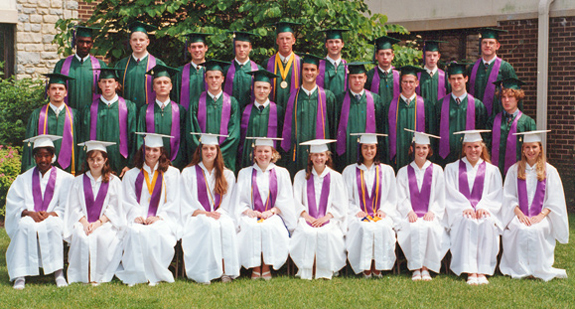 June 1995: CHCA graduates its first class of 29 students, who hear an address from commencement speaker Elizabeth Dole. Graduates of the Class of 1995 go on to attend schools including Emory University, Boston College, Northwestern University, Ohio State and Wheaton College. 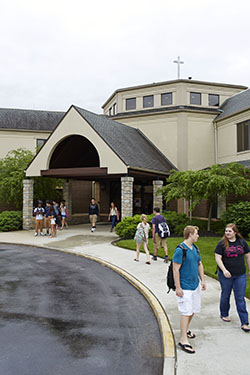 1995: A second campus of 20 acres at the corner of Kemper and Snider Roads becomes home to a freestanding high school and surrounding complex of athletic fields, tennis courts, and complementary buildings.

1996: The Board of Trustees presents a proposal to the Otto Armleder Memorial Trust to establish a downtown elementary school, citing the need for an academic program that would bring CHCA’s unique blend of academic excellence and focus on Christian faith to under-resourced families in downtown Cincinnati. Cincinnati Hills Christian Academy is in turn awarded $7.3 million from the Armleder Trust to purchase and renovate the historic Crosley Square Building at the corner of 9th and Elm streets. In addition, the Carl Lindner Family establishes a scholarship fund in the amount of $5 million to supplement tuition income during the start-up years for students at the Armleder School. CHCA’s Otto Armleder Memorial Education Center would open its doors in August 2000.

1997: Edyth B. Lindner Elementary School is designated a Blue Ribbon School by the U.S. Department of Education.

1997: Karen Hordinski, CHCA’s first staff member dedicated to outreach, forms the Outreach Student Leadership Team with 17 students who work on generating community service opportunities for students benefiting the homeless, elderly, disabled and more. In 1999, the name is changed to Student Organized Service (SOS); by 2018, there are 71 SOS leaders who plan about 34 different projects, many of which are ongoing (recurring weekly or monthly) throughout the year. April 1999: CHCA’s middle school and EBL Elementary sustain major damage when a tornado (with wind speeds up to 260 mph) rips through Cincinnati. For the rest of the school year, the 340 fifth through eighth grade students attend classes in the high school’s gym and Lindner Fine Arts Center.
Read the Cincinnati Enquirer story. 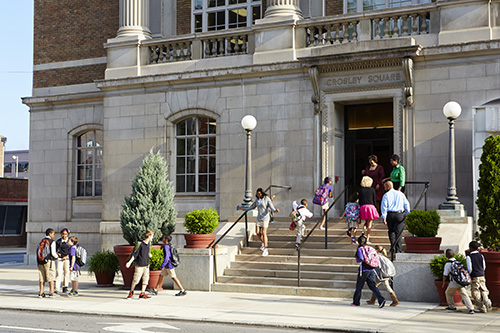 January 2001: The high school engages in the first Winter Term experience, a two week period in which every freshman, sophomore, junior and senior participates in alternative learning experiences. Some students travel for service or learning opportunities, some stay in Cincinnati to serve their community, and others stay at CHCA for cooking classes, PSAT prep and more.

January 2003: The five-year Campaign for Lasting Change is kicked off, seeking to raise $15 million to endow the Armleder School’s Student Scholarship Fund. Thanks to numerous corporations, families and individuals who contributed (including a $5 million match by the Farmer Family Foundation), the goal is met in May of 2008, ensuring a long future for Armleder.

March 2006: Carl Lindner, Jr. donates an additional $16 million to the Armleder School, enabling the school to expand its offerings to include scholarships and programming for grades 7 and 8. Fall 2006: CHCA kicks off its most ambitious capital campaign to date, with the goal of raising $7 million by June 2007. The Promise Campaign would go on to exceed goal and raise $8.5 million for building enhancements to EBL Elementary, the middle school and the high school, as well as additional endowment funding. At the end of the campaign, almost 600 parents, grandparents, alumni and friends will contribute, evidence of the entire CHCA community’s desire to invest in the future of the school.

October 2007: CHCA celebrates its first Founders’ Day, twenty years from the month that the school’s founders first gathered to plan the school. At the same time, CHCA’s motto is changed from “Learn and Serve” to “Learn, Lead and Serve” and the Core Values, Mission and Vision Statements are relaunched, commemorating the ideas of the school’s founding families while positioning CHCA for the road ahead.

For audio, hover over/tap the video above,
and click unmute (

December 2008: The high school campus is named Martha S. Lindner High School in honor of the commitment and heart of the Lindner family for Christ-centered academic excellence.

October 2010: Armleder School celebrates its Tenth Anniversary of being “A Light in the City”.

2013: The Carl and Martha Lindner Armleder Alumni Scholarship was established. 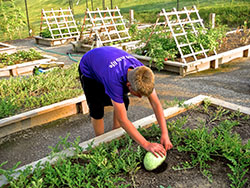 2013: CHCA student Alex O’Brien ’17 had an idea and out of that a sustainable organic garden grew, providing fresh fruits and vegetables to local families in need.

February 2014: CHCA’s annual fundraiser, Celebration Auction and Dinner hits a milestone of $2,500,000 over the course of its 20-year history. 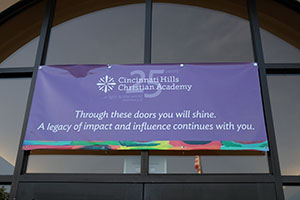 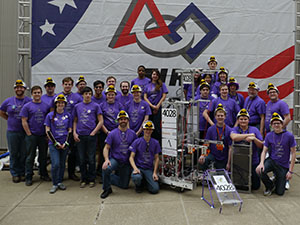 Winter 2015: CHCA’s Robotics team, The Beak Squad wins $10K in a FedEx challenge and competes and places in the top 5th in the world at the FIRST World’s Competition in St. Louis, MO. 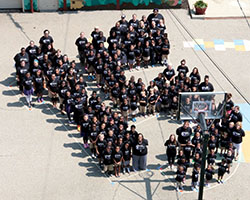 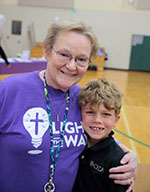 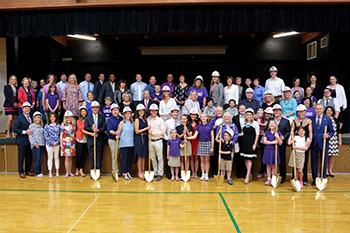 Winter 2016: CHCA launches its “Light the Way” $12 million capital campaign. This important fundraising effort was strategically designed to support updated and renovated spaces, additional resources, and re-imagined programming to reach new levels of engagement for students, teachers, and the community. By the Summer of 2016, the campaign had reached nearly $9 million in funding. 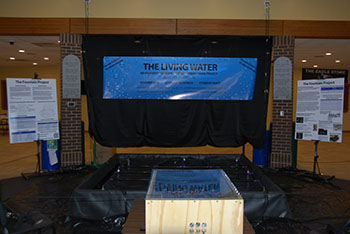 Fall 2016: What began as a paper exercise to represent the culmination of a Fluid Mechanics Unit in AP Physics, an ambitious group of seniors were tasked to “think like an engineer” and design a decorative fountain. These students asked if they could create a prototype, and then build it for full-scale installation on campus. Hence, the school’s first Senior Capstone Project was born on September 15th 2016: Animated Fountain Capstone Engineering Project. 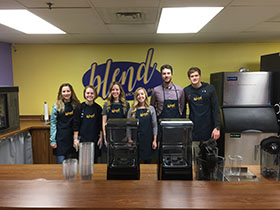 Winter 2017: CHCA Upper School’s second entrepreneurial venture, Blend Smoothie Bar, opens to the public. Serving made-to-order smoothies and gourmet toasts, this business is in full swing to remain open all student bells in the near future.